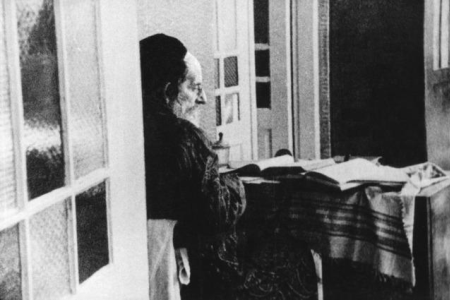 the Prophecy of Baal Hashulam

And it came to pass in the days of the war, the days of the dreadful carnage, that I was praying, crying bitterly all through the night. And behold, at the break of dawn, it seemed as though all the people in the world have gathered in a group before my mind’s eye. And a man was hovering amongst them, with his sword over their heads, lashing their heads. The heads soared upward, and their bodies fell to a great basin and became a sea of bones.

And a voice called out to me: “I am the Lord, God, who governs the world with great mercy. Reach out your hand and take the sword, for now I have given you power and might.” Then the spirit of God clothed me, I held the sword, and that man vanished instantly. As I looked unto his place, he was gone, and the sword—in my possession, my own property.

And God said unto me: “Get thee out of thy country, to the pleasant land, the land of the Holy Fathers, where I will make you a great sage and all the sages of the land shall be blessed in you, for I have chosen you for a righteous sage in all this generation, to heal the human suffering with lasting salvation. Take this sword in your hand, and guard it with thy heart and soul, for it is a sign between Me and you, that all those good things will happen through you, for until now, I had no such faithful man as you, to give him this sword. For this reason, the evildoers did what they did, but from now on, every saboteur that sees My sword in your hand will promptly vanish and be uprooted from the land.”

And I hid my face, for I was afraid to look upon He who was speaking to me. And the sword, a simple, iron sword, which appeared before my imagination as a horrible destructor, has turned in my hands into glimmering letters of the Holy Name Shadai, whose shine and glimmer is filled with light, contentment, tranquility, and reassurance for the whole world. And I said to myself: “May I grant all the dwellers of the world a drop of the purity of this sword, for then they will know that the pleasantness of the Lord is in the land.”

I raised my eyes, and behold, the Lord stood above me and said unto me: “I am the Lord, God of thy fathers. Lift up your eyes from the place on which you are standing before Me, and see the whole of reality, which I have created existence from absence, Upper and lower together, from their very creation in the unfolding of reality, through their continuous evolution, to their completion, as befits the work of My hands, wherein I glory.

Then I saw and rejoiced over the glorious creation and all that is in it, and the delight and pleasure that all dwellers of the earth enjoy. And I was grateful to the Lord.

Then, I said unto the Lord: “We shall serve you with tremor and fear and forever be grateful to Your Name, because from You neither bad nor good emerge, but a long succession of pleasantness, set before us from beginning to end. And happy are those who stride in Your World, which You have prepared for them, for pleasantness and gentleness and abundance. There is no deviousness or obstacles in all Your Deeds, Upper and Lower together.” And I was filled with wondrous wisdom, and atop them all, the wisdom of His absolute Private Providence. And so I have gained wisdom day by day for many days—one hundred and eighty days.

And before I called, the Creator came over me and said, “But behold and see that your wisdom and attainment are far above all the sages that have lived on earth thus far. What have you asked of Me, which I have not given? Why do you pain your spirit with understanding the words of prophecy, which you know for certain are uttered from a degree inferior to yours? Do you wish for Me to bring you down from your degree so you can understand their words as do they?”

I was silent, and I was jubilant, and I answered nothing. After that, I asked the Creator: “Thus far, I have not heard a thing about the persistence of my corpse; all the benefits and destinies that have come to me are from the spiritual, and thither they all aim. What if some illness of bodily harm confuses my mind and I will sin before You? Will You cast me from before you and lose all this abundance or punish me?”

And the Creator has sworn before me in His Great and Terrible Name and in His Eternal Throne that He will never let His Mercy off me for all eternity. Should I sin or should I not, His Mercy and Holiness will never move away from Me, for ever. And I heard and rejoiced. (For you have already achieved your goal, and I have pardoned all your sins, and this mercy.)

And after all these days, I listened attentively to all the promises and destinies I have been chosen for by the Creator. Yet, I found in them neither satisfaction nor the words by which to speak to the dwellers of this world and to lead them to God’s will, as He had told me to. I could not stride among the people, who are vain and slandering the Creator and His creation, while I was satiated and praising, merrily walking, as though mocking those wretched ones.

Matters have touched me to the bottom of my heart, and I resolved that come what may, even if I descend from my sublime degree, I must make a heartfelt plea to the Creator, to grant me attainment and knowledge of the prophecy and wisdom, and the words by which to help the forlorn people of the world, to raise them to the same degree of wisdom and pleasantness as mine. And although I knew that I must not sadden my spirit, I could not stand by, and I poured my heart out in prayer.

In the morning, I raised my eyes and saw the Creator laughing at me and at my words. And He said unto me: “What do you see?” and I said, “I see two people fighting—one wise and perfect and strong, the other small and silly, like a new born child. And the other, the weak, small and tasteless defeated the strong and the perfect.” And the Creator said unto me: “This little one is destined for greatness.”

And the little one opened his mouth and told me some words that I did not sufficiently understand, yet I felt in them all the treasures of wisdom and prophecy that abide among all the true prophets, until I knew that the Lord has answered me and has given me ways among all the prophets and sages of the Creator.

And God said unto me: “Rise up, and look to the east.” And I raised my eyes and saw that the little one has at once risen and equaled himself and his level to the level of the big one, although he still lacked taste and reason as before. And I was bewildered.

Afterwards, the Lord spoke unto me with a vista, saying, “Lay down on your right-hand side.” And I laid down on the ground. And He said unto me: “What do you see?”

And I said, “I see many peoples and nations, rising and falling, and their faces are deformed humans.” And the Lord said unto me: “If you can grant form to all these nations and blow into them the spirit of life, then I shall bring you to the land that I have sworn unto your fathers, to give unto you, and all my goals will have been fulfilled by you.”